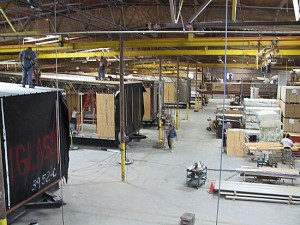 Constructed at Ramtech’s manufacturing facility, the prefabricated building replaced four small temporary facilities that were adjacent to Gulf Marine’s main office complex. After removal of the aging buildings, the 15 module complex was installed on a pad on grade foundation on an existing asphalt base. The building utilizes eight 5 ton Bard Wall-Mount HVAC units zoned within the building layout for the heating and cooling of the 72 private offices, two conference rooms, IT room, and large storage area. The interior is finished out with VCG walls and VCT flooring, while the exterior utilizes a factory applied 29-guage metal R-panel siding.

The new modular building is part of Gulf Marine’s contract requirement to provide for an administrative office and engineering center for Chevron USA during the manufacturing phase of Chevron’s $4 billion Big Foot deep water development project in the U.S. Gulf of Mexico. Beginning in May 2011, approximately 75 Chevron personnel will oversee Gulf Marine’s fabrication and integration of the KBR designed topsides for a dry tree Extended Tension Leg Platform developed by floating production contractor FloaTec, a joint venture between Keppel FELS and J. Ray McDermott. The ETLP, with an on-board drilling rig and 15 well slots, will be installed in a water depth of 5,187 feet in the Big Foot site within Walker Ridge Block 29, one of several offshore leases held by Chevron in the Gulf of Mexico. Discovered in 2006, Big Foot is located 225 miles south of New Orleans and is estimated to hold as much as 200 million barrels of oil. Once the field is brought online in 2014, the daily production capacity is expected to be 63,000 barrels of oil and 25 million cubic feet of natural gas.

Gulf Marine Fabricators, located in Aransas Pass along the US Intracoastal Waterway three miles north of the Corpus Christi Ship Channel, specializes in the fabrication of large offshore structures. When the company first approached Ramtech about the project, they quickly realized that Ramtech’s vertically integrated design-build construction approach to prefabricated buildings would best meet their need. According to Gary White, Ramtech’s Vice President of Sales and Estimating, “the oil and gas industry has a long history of using modular buildings. Once the green light was given by Chevron to begin the FEED for the drilling platform, the speed of modular construction was the only way a project of this size could be built and completed within such a short time frame.”

Located on 20 acres in the southern part of the Dallas-Fort Worth Metroplex, Ramtech has convenient access to the major transportation arteries that serve cities throughout the Southwest. Structured as a vertically integrated design-build construction company, Ramtech provides space planning, design services, manufacturing, site construction and finish-out on every project they produce. The company maintains a consistent workforce of production workers and supervisory personnel with an average of 13 years experience, many with tenures over 20 years. This experience, coupled with Ramtech’s approach to modular manufacturing and construction, allows for greater control at each step in the building process resulting in significant time and money savings for their clients.