Ramtech is Your Portable Classroom and Modular School Building Solution 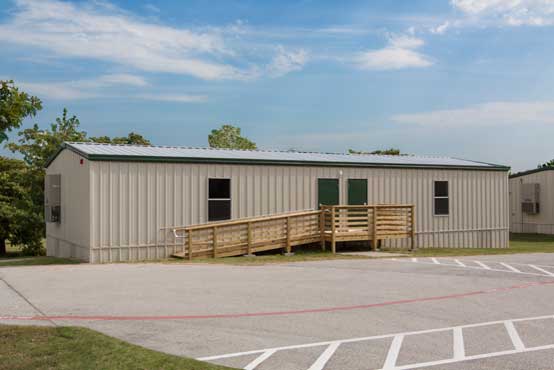 In 1982 Ramtech pioneered the concept of modular-built portable classrooms and temporary modular buildings that are now used by hundreds of public, private, and faith-based schools throughout the Southwest. We've continued to lead the way in providing innovative portable classrooms and modular buildings that can be easily installed and relocated depending on your individual space needs and financial situation. If your requirements should call for a custom configuration or an entire modular campus, Ramtech can react quickly and cost-effectively to those too. However you need to accommodate your space needs, Ramtech provides you with modular classroom solutions and options that give you room to grow.

Ramtech Can Help You Acquire the Right Modular Classroom Building

When overcrowding or a lack of facility space becomes a problem, portable double classrooms or multiple classroom buildings from Ramtech are the proven solution. Whether you need to purchase or lease, our extensive inventory program of both portable classrooms and multiple classroom wings provides for a wide range of units that are in-stock and ready for shipment. And, if you're a public entity or non-profit, there's no need to go through a lengthy and complicated bidding process.

Ramtech can help you substantially shorten the entire procurement process by purchasing or leasing online through our relationship with these purchasing cooperative partners:

Ramtech maintains an available inventory of state-approved portable double classroom buildings that are ready for immediate delivery for most areas in Texas. The same building designs are also available in the other states we service as custom buildings tailored to the local building requirements for those areas. These industry leading designs can be ordered with or without restrooms for purchase or through several short and long term leasing options. For eligible public, government, and private institutions, our portable classrooms may be procured through our approved vendor relationships with the these popular network cooperative purchasing programs:

Each of these programs allow their members to buy and lease a broad range of Ramtech's products using a prequalified bid schedule, eliminating the need to go through the lengthy and expensive process that traditional bidding requires. If one of the Ramtech portable double classrooms is not large enough to meet your needs, Ramtech also has standard classroom wing designs from four to sixteen classrooms to meet your exact requirements.

In under two months Ramtech Building Systems was able to use modular construction to replace the entire middle and high school instructional and support facilities of West (TX) ISD. Both campuses were destroyed by the massive fertilizer plant explosion that occurred in April of 2014. The temporary campus was comprised of 28 separate structures that included 17 new relocatable modular buildings which were designed, manufactured, and installed by Ramtech. The 69,776 square foot modular construction project included three 10-classroom buildings, four computer and science labs, boys and girls locker rooms, an administrative office, cafeteria, large band hall, and a life skills building.