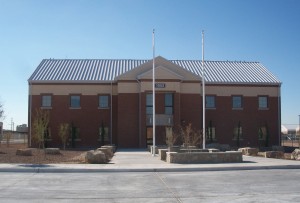 Located on the main cantonment of the sprawling Fort Bliss military base in El Paso, Texas, the two-story 15,207 square foot Unit Operations Facility (UOF) Battalion Headquarters building is one of three prefabricated buildings that Ramtech will provide under the company’s Indefinite Delivery Indefinite Quantity (IDIQ) contract with the U.S. Army Corps of Engineers. The UOF building is designed to house the 93rd Military Police Unit, a military police battalion located immediately adjacent to a warehouse district that was originally used as cavalry stables at the turn of the 20th century. Built utilizing Ramtech’s Accelerated Building System slab-on-grade construction method, the second floor houses the primary command headquarters while the first floor incorporates three 860 square foot classrooms designed with a unique field installed truss-girder supporting a 15 foot cantilever in the center section. The classrooms are divided by two folding acoustical partitions allowing the Army increased flexibility in configuring their instructional space.

Developed by Ramtech, the Accelerated Building System utilizes the best of onsite and offsite construction by combining the speed and efficiency of prefabricated buildings with the quality and appearance of site applied interior and exterior finishes. Ramtech achieves this by employing simultaneous construction tracts. At the same time a site specific, engineered reinforced concrete slab foundation is constructed on the building site, the fabrication of the modular buildings are taking place in Ramtech’s manufacturing plant. When complete, the building sections are shipped to the project location, crane-set onto the concrete slab, then quickly weathered-in and finished-out on site. This form of design-build construction results in a superior facility with lower design and construction costs, a faster project completion schedule, and superior quality over older site construction methods. “After coordinating with the base historian and architect, the flexibility of the Accelerated Building System allowed us to satisfy the exterior requirements for a designated historical area while meeting all of the Army’s performance criteria” states Gary White, Ramtech’s vice president of sales and estimating, “and we were also able to reduce the design costs and compress the overall construction schedule.”

Faced with the challenge of acquiring permanent facilities “faster, better, cheaper, and greener,” in 2005 the Army Corps of Engineers embarked on a master planning program to change the way it executed MILCON and BCA programs. Frustrated at not getting quality facilities in the timeframe it needed them, the Corps established a continuous building program that emphasized the standardization of facilities and processes while expanding the use of prefabricated buildings including permanent modular buildings. With their IDIQ award, Ramtech became the first design-build construction company in the commercial modular industry to receive a prime contract under the Army’s Modular Force Construction Program. The company participated in many public and private meetings with the Corps in order to convince them that the Accelerated Building System approach provided a viable alternative to conventional stick-built methods.

Jeff Ward works in Business Development for Ramtech Building Systems, Inc. He has worked in the modular industry for 13 years serving primarily the Federal Government and the Commercial Markets.