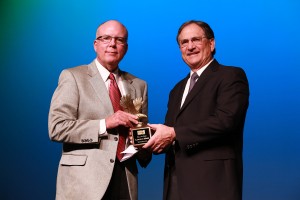 Linc received the award from Mike Slataper, who also was a MBI Hall of Fame recipient back in 2010 and made the trip out to Las Vegas to make the special presentation.  The MBI’s Hall Of Fame Award is the Association’s highest honor and is given out annually in recognition of those whose careers have been dedicated to improving and promoting the modular building industry, or whose acts have had a significant impact on the careers of others. The criteria for induction includes a minimum of 30 years in the industry with exemplary corporate citizenship through service to others, as well as helping to advance the industry in the areas of product design, financial management, marketing, production methods and efficiency or other areas that have added significantly to the industries competitiveness and success.

Linc began his career in the commercial modular construction industry as a draftsman in 1976 with Cliff Industries, then quickly moved into other areas with the company including estimating, sales, design and construction of manufacturing plants, and the management of manufacturing operations.  In 1983 he helped form Mark Line Industries of Pennsylvania which grew into one of the premier wholesale manufacturers in the Northeast.  In 1991 Linc joined Ramtech building systems and was instrumental in helping to evolve Ramtech into a full-service design-build construction company offering everything from traditional relocatable modular buildings to various forms of permanent modular construction including the company’s flagship Accelerated Building System prefabricated building approach.  Linc has been Ramtech’s president since 2011 after serving in operational roles as the company’s vice president of construction and chief operating officer.

Linc’s participation as a modular building industry representative began in 1985 when he was elected to the Board of Directors of the Mobile Modular Office Association, the predecessor organization to what would later become the Modular Building Institute.  In 1987 he served the first of two terms as MBI President, the second coming in 1999.  In total, Linc has served the Association as a board member or an officer for 15 of its 32-year history.  He is a recognized expert in modular building design, manufacturing, and construction, and has acted on the industry’s behalf in testifying before Congress on issues such as the passage of HR 3593, known as the VA Construction Assistance Act of 2014, which allowed for the increased use of the design-build project delivery method.  Linc recently celebrated 40 years of marriage to his wife Linda, who together have two sons and four grandchildren.  As a long-time resident of Mansfield, Texas where Ramtech has its corporate headquarters and manufacturing plant, he is actively involved in several community organizations including the local public school district and the family’s church.