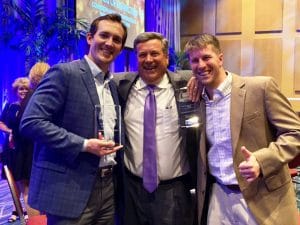 Ramtech is proud to announce that we have received our first ever Best of Show Relocatable award at this year’s MBI 2020 World of Modular annual convention and trade show. The Best of Show award was shared with Wilmot Modular Structures of White Marsh, Maryland who brought the project to us as their joint venture partner. The 4,956 square foot design-build project was constructed and installed by Ramtech for a private energy company in Killeen, Texas. The modular building, designed to be relocated or expanded in the future, will serve as a template for future sites across the United States. In addition to Best of Show, the project also garnered an Awards of Distinction in the Relocatable Modular Office Under 10,000 Square Feet category.

Ramtech also received an Awards of Distinction in the Permanent Modular Special Application category for an in-plant breakroom for Martin Marietta. The 1,080 square foot project, located at the company’s Midlothian, Texas cement plant, was constructed using traditional permanent modular construction with atypical ten-foot-wide modules in order to fit within an area surrounded by the extensive piping and rigging of one of the cement plant’s kilns. The project also required a small on-site construction footprint to minimize the impact on Martin Marietta’s existing operations.

More information on Ramtech’s projects, and the other Awards of Distinction winning entries at this year’s conference, can be viewed on the Modular Building Institute’s website using this link.