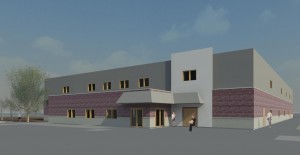 Ramtech has announced that the company has moved to the construction phase on the new $7.2 million high school building for the Randolph Independent School District.

The two-stage design-build contract calls for Ramtech to provide complete turnkey services to the district including the site development, manufacturing, and installation for a 43,917 square foot two-story facility using Ramtech’s Accelerated Building System slab-on-grade permanent modular construction approach. The design of the structure will provide space for 23 classrooms, an eighth grade science center, two computer labs, two student commons, and an administrative area with a counseling suite and nurses station.

The facility will also include four high school level labs for physics, biology, chemistry, and environmental science all situated around a common central preparation area. The building’s exterior design calls for a combination of brick, split-face concrete block, and high profile architectural metal designed to complement the finishes of the existing campus. To make way for the new modular school building the school district demolished two existing structures which were removed during the spring of this year.

Ramtech is scheduled to start the site mobilization process at the beginning of September, and will commence with the manufacturing of the modular building sections in October to accommodate a project completion by the end of May of next year.  The Randolph Field ISD serves the children of military personnel at Randolph Air Force Base, part of the Joint Base San Antonio System. It is one of three school districts in Texas whose boundaries all fall within a military installation, the others being Lackland AFB and Fort Sam Houston. Prior to awarding the design-build contract to Ramtech, the school district worked with Gallagher Construction to develop the district’s master plan and to facilitate the RFP and contract negotiations for the project.

Storm Season is Here and Ramtech is Ready