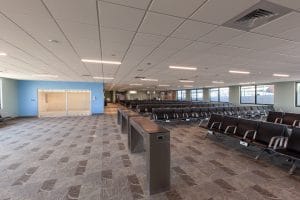 At the end of November Ramtech was able to photograph the completed permanent modular building we manufactured and installed this year for the Northwest Florida Beaches International Airport terminal expansion project in Panama City Beach, Florida. The airport took delivery on a new jet bridge that was installed in November, which officially completed the 7,168 square foot building addition that increases the available passenger capacity and seating areas for the two gates that serve the airport’s regional jet operators.

Ramtech worked as a subcontractor to Allstate Construction of Tallahassee, Florida, the general contractor on the project, providing the core and shell manufacturing of the all-steel modular sections, the installation of the building, and the finish-out of the exterior. Using our pier and beam permanent modular construction, the Type II-b all-steel building addition was connected to the existing terminal structure using a site-built corridor. Each of the nine factory-built modular sections arrived on location complete with exterior walls that were clad in 24-gauge high-rib R-Panel steel siding, all of the door and window assemblies, the interior walls with un-finished gypsum board and the required shear walls, a perimeter steel frame floor system, and an EPDM roof assembly. Ramtech also provided the exterior wall and floor penetrations that were required for the onsite installation of the mechanical, electrical and plumbing systems. We manufactured the modular sections in three sizes to meet the buildings required configuration, which were then installed and welded onto a poured-in-place concrete pier foundation system.

The Northwest Florida Beaches International Airport is located 18 miles northwest of Panama City and opened for commercial flights in May 2010. Occupying over 4,000 acres in Bay County, the airport is owned by the Panama City-Bay County Airport & Industrial District and is serviced with daily flights by American Airlines, Delta Air Lines, Southwest Airlines, and United Airlines. The expansion of the terminal is part of a $10.5 million grant from the FAA to improve and expand the airport’s facilities.