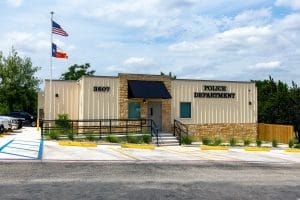 Ramtech recently completed the installation of a permanent modular building for use as a police department headquarters for the City of Cottonwood Shores, TX.  The 2,184 square foot facility provides additional space and room for growth for the city’s current five-officer police department. The building replaced an aging 720 square foot facility that was declared too structurally unsound to be repaired or added on to.

The new modular building provides two private offices for the chief of police and the second in command of the police department. Also included is a large open office area for the patrol officers, one intake and two interrogation rooms, a large evidence storage room, and a break room area. The modular building was constructed using our pier and beam permanent modular construction approach, with the modular sections installed on a stem wall foundation system that was provided by the city. A combination of 26 gauge R-panel siding and stone veneer were installed on the exterior parapet wall which included a concealed roof line with additional height at the main entry to enhance the architectural appearance. The interior was finished with cost-effective vinyl covered gypsum on the walls and vinyl composition tile flooring throughout the facility.

The city of Cottonwood Shores is located 50 miles west of Austin. Occupying two square miles on the south bank of the Colorado River in southwestern Burnet County, the community has seen consistent growth and now has approximately 1,200 residents. Ramtech was able to complete the installation and finish-out of the permanent modular building in just over five weeks.