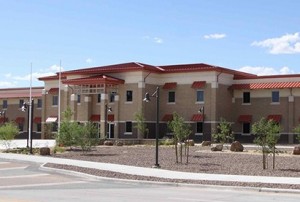 The U.S. Army has recently occupied the first of a series of permanent modular buildings developed and built by design-build construction firm Ramtech Building Systems of Mansfield, Texas. Located in the Biggs Army Airfield section of the sprawling Fort Bliss military base, the two-story 99,050 square foot Combat Aviation Brigade (CAB) building is one of three prefabricated buildings that Ramtech will provide under the company’s Indefinite Delivery Indefinite Quantity (IDIQ) contract with the U.S. Army Corps of Engineers.

Developed by Ramtech, the Accelerated Building System utilizes the best of onsite and offsite construction by combining the speed and efficiency of prefabricated buildings with the quality and appearance of site applied interior and exterior finishes. Ramtech achieves this by employing simultaneous construction tracts. At the same time a conventional concrete slab foundation is prepped and poured on the building site, the fabrication of the modular buildings are taking place in Ramtech’s manufacturing plant. When complete, the building sections are shipped to the project location, crane-set on the concrete foundation, then quickly weathered-in and finished-out on site. This form of design-build construction results in a superior facility with lower design and construction costs, a faster project completion schedule, and superior quality over older site construction methods. “The Accelerated Building System combines the best of what factory built modular construction and site construction have to offer,” states Mike Slataper, Ramtech president and CEO. “It can provide a client with a 10 to 25% reduction in design costs while cutting 25 to 40% off the construction schedule.”

Faced with the challenge of acquiring permanent facilities “faster, better, cheaper, and greener,” in 2005 the Army Corps of Engineers embarked on a master planning program to change the way it executed MILCON and BCA programs. Frustrated at not getting quality facilities in the timeframe it needed them, the Corps established a continuous building program that emphasized the standardization of facilities and processes while expanding the use of prefabricated buildings including permanent modular buildings. With their IDIQ award, Ramtech became the first design-build construction company in the commercial modular industry to receive a prime contract under the Army’s Modular Force Construction Program. The company participated in many public and private meetings with the Corps in order to convince them that the Accelerated Building System approach provided a viable alternative to conventional stick-built methods.

Because the CAB building houses U.S. combat troops, using the Accelerated Building System allowed Ramtech to meet the Army’s rigid anti-terrorism construction standards. In addition to a six inch, 4,000 psi concrete slab foundation whose footprint is larger than a football field, the building also includes blast resistant windows and doors and a building envelope encapsulation in the event of a chemical or biological attack. To meet the redundancies required for power and HVAC, a Kohler 50 KVA standby generator and 50 KVA Eaton Powerware UPS Station were installed, along with over 22 tons of redundant HVAC for the SCIF, BOC & NOC. The data and communications system features a 900 pair copper and fiber optics entrance with over 40 miles of wiring throughout the building. To comply with the latest federal executive orders, the building meets the requirements of LEED Silver Certification and is designed to conserve energy by reducing the power consumption requirements established in ASHRAE 90.1 by at least 30%. To accomplish this in a desert environment, Ramtech utilized four sixty-ton Trane Intelipak evaporative assisted D-X self-contained roof top units. These four primary RTUs feed over 140 individual VAV boxes providing flexibility in temperatures setting throughout the structure. The entire system is connected to a base-wide Energy Management Control System through an open implementation of the LON operating system.

Other aspects of LEED compliance in the building include automated lighting controls, two-stage low consumption flush valves, waterless urinals, energy star roofing material, recycling of waste materials (to achieve a 50% diversion of waste normally sent to land-fills) and utilization of construction materials with a 20% recycled content.

Moving Forward While Taking a Look Back