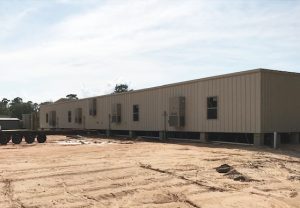 Ramtech has recently received another order from Cleveland Independent School District for an additional two eight-classroom relocatable modular school buildings for its Cleveland Middle School campus. This will bring the total number of Ramtech’s standard portable and multiple classroom wings installed this year at the district’s elementary, middle, and high school campuses to seven buildings. We will complete the manufacturing of the two new facilities this week, and expect to complete the installation phase by the middle of October. As with the previous facilities, the modular school buildings will utilize R-Panel metal siding for the exteriors, with vinyl covered gypsum walls and vinyl composition tile flooring in the interiors.

Located in the Texas Education Agency’s Region 4, part of the greater Houston area, the Cleveland ISD serves the cities of Cleveland and Plum Grove as well as portions of San Jacinto and Montgomery counties. Beginning in May of 2018, the fast-growth district began utilizing our extensive line of standard portable double and multiple classroom buildings as part of their effort to meet the burgeoning student population. The district enrolled over 1,000 students last year and is currently growing at a rate of over 17% a year. Under current projections, by 2021 the Cleveland ISD schools are projected to have more than 10,000 students.

The recent unsuccessful May 2019 bond election resulted in the need for the district to add the additional modular classroom buildings in lieu of building permanent facilities. In the past 12 months the fast-growth designated district has acquired 20 modular buildings from us totaling 75,096 square feet. These modular-built facilities include the seven eight classroom buildings, 12 portable double classrooms, and a portable restroom.