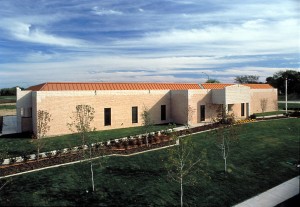 Ramtech announced this week that we reached an agreement with the National Oceanic and Atmospheric Administration (NOAA) on a new 15 year lease (with ten years guaranteed) for the agency’s National Weather Service Weather Forecast Office that we built for them in Fort Worth back in 1993.

Originally leased by NOAA for ten years with a ten-year option, the new gross lease includes janitorial, maintenance, and landscaping services along with covering emergency 24/7 response, casualty insurance, and taxes.  Ramtech acted as the owner-developer on the project, while also designing and manufacturing the 10,500 square foot modular office building that sits on a fully fenced 4.55 acre site with 24-hour security. One of our most featured permanent modular construction projects over the years, the renewal of the building lease after 20 years of use is ample evidence that permanent modular buildings are just as durable and can achieve the same life spans as conventional site-built structures.

Built using our traditional permanent modular construction, the building utilizes wood and steel construction and a split-faced block exterior.  One portion of the structure also has 12 inch thick concrete walls and ceiling to serve as a hardened shelter in the event of severe weather while also doubling as the facility’s break room during normal business hours.  To maintain the consistent operation of the building in the event of a complete loss of electrical service, the facility has an emergency generator capable of providing for seven days of operations at 100% of the buildings rated load.

The interior space features a large weather forecast operations room, five private offices, conference room, and a broadcast area.  To handle the IT requirements, over 50% of the interior space has raised computer flooring to accommodate the specialized equipment  and computer servers. To maintain the proper temperature in these areas, the building has a fully redundant HVAC system for cooling and heating. The site also includes a non-attached 320 square foot building used for the daily launch of a hydrogen or helium-filled weather balloon with an attached radiosonde, a battery-powered instrument that measures and transmits profiles of air pressure, temperature, and relative humidity while also obtaining data for wind direction and speed from the Earth’s surface to about 20 miles high in the sky.