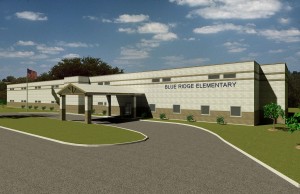 Ramtech has now begun the site work and fabrication for the first of two new permanent modular buildings as part of a multi-stage school construction project for the Blue Ridge Independent School District in Blue Ridge, Texas.

Both of the prefabricated buildings will sit adjacent to one another, starting with an 18,088 square foot single-story middle school that will accommodate 12 classrooms, two science labs, and administrative office space.

After the completion of the middle school, the existing elementary school will be torn down to make way for a new two-story 27,192 square foot structure scheduled to begin construction in May of 2011.  The elementary school will feature 17 classrooms, two science labs, administrative office space, and a comprehensive media center. Each facility will have integrated data, communication and alarm systems, and a mechanical and lighting system designed to accommodate the school district’s energy management system. They will also incorporate a masonry exterior with a split-faced block wainscot to match the other surrounding structures, and both will be built utilizing Ramtech’s Accelerated Building System slab-on-grade construction method.

Developed by Ramtech, the Accelerated Building System has a proven track record as an ideal approach for permanent school construction projects.  It utilizes the best of onsite and offsite construction by combining the speed and efficiency of prefabricated buildings with the quality and appearance of site applied interior and exterior finishes. Ramtech achieves this by employing simultaneous construction tracts. At the same time a site specific, engineered reinforced concrete slab foundation is constructed on the building site, the fabrication of the modular buildings is taking place in Ramtech’s manufacturing plant.

When complete, the building sections are shipped to the project location, crane-set onto the concrete slab, then quickly weathered-in and finished-out on site. This form of design-build construction results in a superior facility with lower design and construction costs, a faster project completion schedule, and superior quality over older site construction methods. According to Gary White, Ramtech’s Vice-President Technical Services, “The school superintendent at Blue Ridge had been through other large construction projects in his career. When we were asked to come out and make a personal presentation, he quickly saw that using the Accelerated Building System could get them in new facilities faster and for a lot less money.”

The Blue Ridge ISD is located in the rolling hills of north central Texas 50 miles north east of Dallas. One of the many small farming communities in northern Collin County that is now seeing rapid development, Blue Ridge is a school district that was badly in need of new facilities.  With many of their students currently in aging metal buildings, the local community pushed for more modern facilities and overwhelming passed a $7.3 million bond issue with 71% support in the district’s bond election last year.

Prior to the bond issue, the district realized that their existing master plan and design concept would be prohibitively expensive and they needed an alternative approach.  Their goals were straightforward – develop a relationship with a proven construction firm that emphasized both value engineering and the ability to provide a 50 year life span building with an expedited construction timeframe. In Ramtech and the Accelerated Building System they found the perfect fit. Now on schedule, the middle school will be completed by June 15, 2011 with the elementary school scheduled for completion on December 1, 2011.