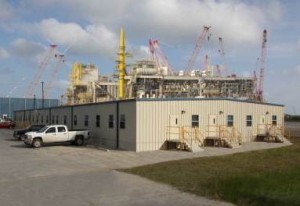 In March of 2011, Ramtech finished the work on a new 15 module 13,600 square foot modular building for Gulf Marine Fabricators of Aransas Pass, TX, a division of Gulf Island Fabrication of Houma, LA.

The prefabricated building replaced four small temporary facilities that were removed in order to meet Gulf Marine’s contract requirement to provide for an administrative office and engineering support center for Chevron USA during the manufacturing phase of Chevron’s Big Foot deep water offshore platform. Now in the second year of the three year development project, Ramtech recently had an opportunity to visit the Gulf Marine site to check on the building and photograph it for an upcoming project profile and case study.

Installed using a pad on grade foundation on an existing asphalt base, the building features eight 5-ton Bard Wall-Mount HVAC units zoned within the building layout for the heating and cooling of 72 private offices, two conference rooms, an IT room, and a large record storage area. The interior is finished with VCG wall covering and VCT flooring, while the exterior utilizes a factory applied 29 gauge metal R-panel siding. The modular construction project is part of Chevron’s $4 billion Big Foot Deepwater development project in the U.S. Gulf of Mexico.

Just prior to our visit, the gargantuan hull of the dry tree Extended Tension Leg Platform arrived at Gulf Marine after a three-month sea voyage from Korea. In the coming months, the platform’s topsides containing the water injection system and other above-water production equipment will be lifted and attached to the massive structure in three modules. Then, in early 2014 the Big Foot platform will be shipped out to the Gulf of Mexico approximately 225 miles south of New Orleans. Once there, it will float in 5,200 feet of water, with the capability of processing 75,000 barrels of oil and 25 million cubic feet of natural gas per day beginning later that year.