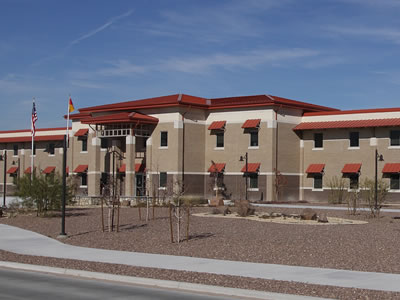 The blog site for the Modular Building Institute recently posted an article that addressed upcoming spending reductions by the Department of Defense.  The article stated that “Defense spending may be down somewhat, but there’s still plenty of project dollars out there if you know where to look,” while also adding that firms seeking military contracts must keep abreast of five military construction trends. Ramtech took a look at these trends to show how our approach to permanent modular building construction satifies these requirements.

Alternative Procurement/Delivery Methods:  As a vertically integrated design-build construction company, Ramtech has the ability to participate at a high level on DOD projects utilizing several alternative project delivery methods.  These include either design-build, design-adapt, design-assist, as well as the fabrication and erection of type 2 or type 5 buildings.  We have also worked as a prime design-build contractor and as a subcontractor with some of the largest design and construction firms in theUnited States.  Our goal is to continue developing relationships with other large general contractors, as well as 8(a) contractors that can utilize our skills.

Fast-track Scheduling and Prefabricated Systems:    This is the primary reason for  Ramtech’s success.  Our Accelerated Building System (ABS) method utilizes a simultaneous construction approach by manufacturing a prefabricated building system in our manufacturing plant while the building pad and site utilities are being completed.  This process reduces the cost of construction as well as the construction schedule by 20-50%.

BIM:    Ramtech’s in-house design/engineering staff has worked with AutoCad and other software packages for over 20 years, while outsourcing BIM to consulting A/E firms.  Ramtech however expects its in-house design team to add BIM to its overall design capability by 2013.

Sustainability:   In addition to reducing the cost and time of construction, Ramtech’s prefabricated building system significantly reduces waste when compared to on-site construction.  Materials are usually purchased direct from the factory reducing the cost of materials when compared to purchasing through distributors, suppliers, or subcontractors, and waste is reduced to less than 1% through a rigid recycling process.  Additionally, Ramtech’s buildings are designed for 50 plus years of life using materials that are easily maintained and recycled as they wear out.

Net-zero in energy, water, and waste:   While there does not currently exist a military base that meets net-zero for energy, water, and waste; Ramtech’s approach to design-build is certainly moving in the right direction.  As stated above we are already approaching virtually zero waste.  Water use has significantly improved through the use of highly efficient fixtures and the capturing and reuse of run off, as well as the development and use of more efficient plumbing fixtures.  While the energy codes continue to become stricter, it is likely to be years before the first net zero energy facility is completed.  The requirement is to generate as much energy on a military base as the base uses.  Ramtech is committed to the continued improvement in energy, water, and waste reduction with the desire to someday reach net-zero.

For over 30 years Ramtech has worked with numerous federal, state, and local government agencies in providing both temporary and permanent prefabricated buildings. The Department of Defense’s requirements on permanent construction jobs are generally more challenging than projects for other government agencies, however through  continuous process improvement in adapting to these five trends, Ramtech expects to be in an ideal position to compete on military construction projects well into the future.

Linc Moss is President of Ramtech Building Systems, Inc.  He has been in the modular construction industry for 36 years, has twice been President of the Modular Building Institute, and has represented the commercial  modular building industry before Congress.